skip to main | skip to sidebar

Response to a Motherboard

Isn't that precious..
320 million Americans, maybe 5% give a rats rump... 7 Billion on the planet 80% of which are hand to mouth.
Look at pollution in China, search pollution in India., no I mean really research, look a pictures and read stories....
So while you're texting with your ipad/pod/watch/device; Foxconn in China- the company that builds your beloved little idevices - employs just shy of 1 million workers - including children, chained to desks, nets on the buildings to catch the suicide jumpers...
stroll through a 7-11.. see those cutesie little beedies (the flavored cigarette sized cigars usually by the check out) - those are hand rolled in India by children sold by their parents into indentured servitude as young as 5.
Look at the American south west desert where children play on radio active tombs housing 1950's test waste...
Search youtube and for '7 dwarves lie to Congress' in which the CEO's of big tobacco systematically lie under oath before congress. The exact same pattern that kept lead based paint used in American homes till 1976, knowing it causes brain damage and outlawed in Europe in the 1940s....
Look at slurry used for fracking - courtesy of Dick Chenney's company - the same Richard who pushed through an energy bill that exempted oil and gas companies from any harm to existing or future EPA laws...
Take a drive around the American cost line... all 5-40 above sea level, all hugely productive agriculture and food distribution infrastructure - and all will be underwater in 100 years... where is the replacement land to grow food for the 7 billion (or 10 billion by then) mouths?
Search google for the ogallala aquifer - in a mere 60 years of industrial farming, the entire swath of the midwest growing breadbasket from N Dakota to Texas has consumed and estimated 50% of a water supply that takes 10's of thousands of years to recharge....
Guess what, the water to grow most of this countries food is gone in 50 years or the land it grows on is past the new beach front.For the first time in recorded history, there is ZERO snowpack in the California mountains.Trends baby, trends, and they're all telln the same story.
Dude... we've got some big arse problems to solve - it's not just how animals are treated, but we're really, really crappy about how we treat other humans - and I've not even touched yet the growing religious extremism and it's physical abuses and disfigurement of women...
and really... you want me to worry about a chicken or pig that may be in a small cage??burp.
Posted by BT Richards at 11:14 PM No comments:

As evolutionary science predicted, another species is found that fills a gap.  The legged fish could well be an ancestor to every legged creature. No god found here, just evolution. 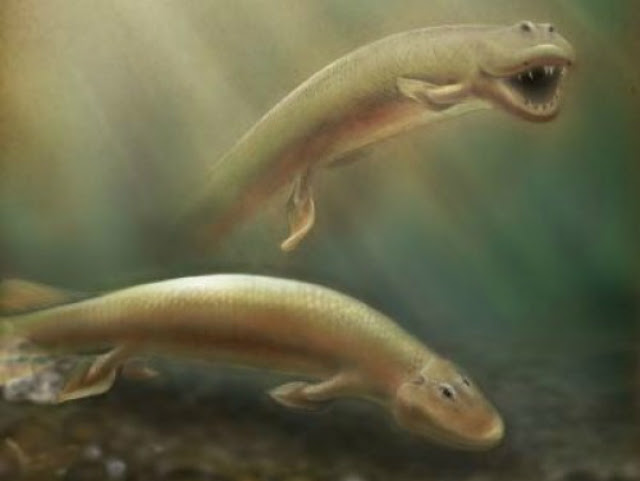 What does it take… how much preponderance of evidence is required before an American politician can stand up and proclaim their belief in Evolution?  That’s the travesty.
Posted by BT Richards at 4:42 PM No comments:

I was at work the other day when a theist came to my office. A rather casual conversation turned up the theist’s temperature when he made the statement that evolution was a lie, and there was no “proof” of evolution. He continued and stated that no missing link had ever been found and thus evolution was a farce. I asked him where he got his information. He told me his pastor had told him so. I told him his pastor was misinformed and that evolution has long been understood as fact. I told him there is no 1 “missing link”. We have already put together the entire lineage. This lineage matches forward and backward from agrees with geology, archeology, and biology.

He understood none of this, and continued to spout, "there is no missing link. So, I showed him the following picture and asked “Which one of these skulls is not the missing link?”. 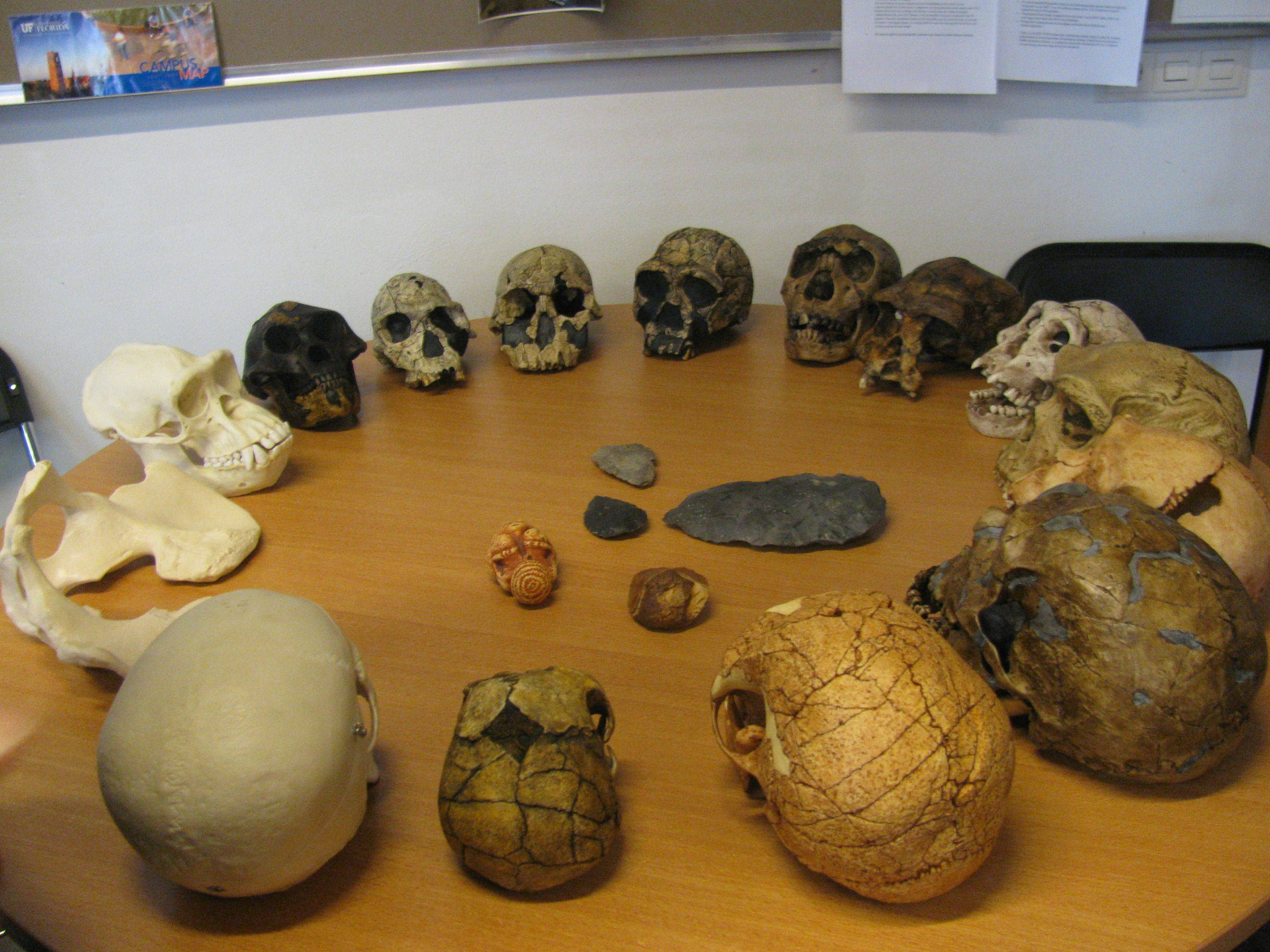 The theist stormed out of my office unable to answer.
Posted by BT Richards at 1:08 PM No comments:

Religious zealots continue their claims that “morals” only come from Religion. Yet, today, here we have a woman executed because she was “convicted” of practicing magic and sorcery. She was arrested by – “the religious police”.

I don’t care of this was a Muslim, Hindu or Christian case.. It takes the backing of religious fervor to commit this type of atrocity on another human being.

Ask yourself, when was the last time someone was executed in the name of “Science” for contradicting science? The answer, never.

The massacre in Norway is the epitome of pure, unadulterated hate, intolerance and ignorance resulting in evil. Anders Behring Breivik, described as a right wing evangelical did what he felt God needed him to do.

This modern day re-enactment of the Crusades proves that Christianity at its core is evil. This heinous act, like 9/11 is clearly a Faith Based initiative. These crazies killed because they believe their faith demands it. There is a clear distinction between killers who happen to be faithful, and killers who kill because of their faith.

Christians like to switch it around using examples like Stalin as the greatest killer of all time being atheist. Joseph Stalin happened to be atheist, like he happed to be right or left handed. He did not execute the great purging because of atheism, or in the name of atheism. He did it for power, self promotion, paranoia and delusion. Atheism in Stalin’s case, is an arbitrary adjective.


One can not say the same for Anders Behring Breivik, those involved in 9/11 or Christians in the US that kill abortion Doctors. Those people choose to commit murder because they believe their faith demands it. They perform these acts for God, in the name of God. These killings are faith based initiatives.

Nobody has ever seen an atheist strap a bomb to themselves and detonate it in a crowd. It doesn’t happen. That dept of insanity requires the inspiration religion. Humanity as race, will not successfully move forward till we cure the mental illness that is religion. It’s that simple.
Posted by BT Richards at 6:31 AM No comments:

I just learned something the other day, and it’s facts are almost a revelation.

Let me just lay it out there…

Israel Finkelstein, chairman of the Archaeology Department at Tel Aviv University, with archaeology historian Neil Asher Silberman, in their book "The Bible Unearthed: Archaeology's New Vision of Ancient Israel and the Origin of Its Sacred Text." After decades of resseach in the Sini Desert, concluded and agree, THE EXIDUS NEVER HAPPENED!!

This guy is no crack pot, he is Chair of a Department of Tel Aviv University. The very Jew’s who this supposedly happened to, now admit it’s a mere fable. Rabbi’s have known this for year, few have admitted it.

The findings are shocking:
 Israelites were never in Egypt
 The Israelites did NOT wander the desert
 The Israelites did NOT conquer the land of Cannon,
 The Kingdom of David and Solomon was a small tribe, not a regional power as described in the bible.
 There was no chase of the Israelites into the Dead Sea by the Egyptians
 Tales of Abraham, Isaac, Joesph were the first to be debunked by biblical scholars due to anachronisms and inconsistencies.


In addition to a total lack of archeological evidence of anyone wondering the desert for 40 years:
 When the Egyptian Pharaoh Ramsese III conquered Canaan between 1280bc and 1260bc, there are no records of ANY Hebrew tribes. And all tribes we meticulously documented by the Egyptians.
 Herodotus (c. 484 BC – c. 425 BC), the “Father of History”, Described all the people and places he encountered during this travels throughout Western Asia… He omits both Jews and Jerusalem.
 The City of Jericho – supposedly raised by the Israelites, did NOT exist at the time, and thus there were no “walls to come tumbling down”.

Those scholars, now admitting the bible is just plain wrong, have detracted the claim of its historical importance.

Simply put, well kept Egyptian records omit the Jews. There is no evidence of encampments to support the existence of these peoples where the bible places them.

The bible is just wrong. It was folk tails told around camp fires of Bronze Age illiterates. At some point, we as race must stand erect and walk away from the belief of mysticism and magic.
Posted by BT Richards at 10:23 AM No comments:

I have fish tank with a pair of angelfish. I've had them for over 3 years.

Every morning I walk by the tank, push a button and make their sun rise. I lift the lid, and cause food to fall from the their heavens. I cause it to rain into their tank by adding more water.

It occurred to me this morning, I am God. I do for them, what is says in the bible god does for us, I must therefore be god, or a god. God of the fish tank!

From their perspective, what else can I be? I provide food, water, light, friends, I clean... their entire universe exists because I created it. Their universe continues because I maintain it. Computers, cars, laundry - all concepts beyond their comprehension.

It reminds me of Clarke's 3rd law: Any sufficiently advanced technology is indistinguishable from magic. Or Just because you can't explain it today, does not prove devine.
Posted by BT Richards at 7:09 AM No comments: